Built to LEED Silver, constructing this unique school required a wide variety of construction methods. The building was designed with a very open concept where much of the structure, mechanical and electrical were exposed, thus allowing the daylight to flow through the building. The main floor was a combination of structural slabs on void and structural formed slabs over a crawl space. The second floor was constructed using structural suspended slabs that were architecturally exposed as main floor ceilings. The gymnasium and another small area had steel joists and metal deck roof structures. The remaining area was a combination of structural steel and glulam with prefinished metal deck. Many features portrayed the Saskatchewan landscape, including images such as clouds and the Northern Lights. The flooring represented a river running through different coloured fields. A living wall two-storeys high created a mature look in the open commons area. On the roof, a patio created an outside classroom and a green roof area. Also included in the construction was the re-use of four portable classrooms which were brought over from another school. The portables were striped to the structure and rebuilt to become part of the new school. Safety played a major role in this project as the school was built within 1.5 metres of the existing school, which remained operational throughout the construction. When the new school was complete, the old school was demolished to accommodate a new parking lot and a playground. 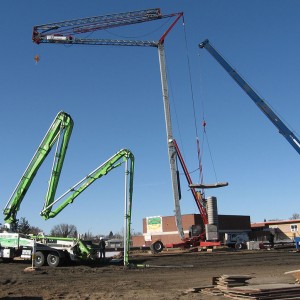 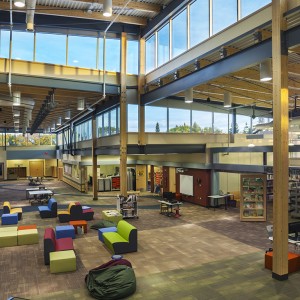